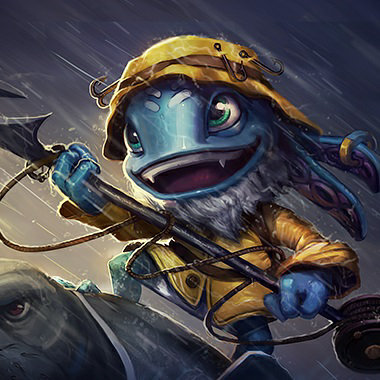 Fizz is an amphibious yordle, who dwells among the reefs surrounding Bilgewater. He often retrieves and returns the tithes cast into the sea by superstitious captains, but even the saltiest of sailors know better than to cross him—for many are the tales of those who have underestimated this slippery character. Often mistaken for some manner of capricious ocean spirit, he seems able to command the beasts of the deep, and delights in confounding his allies and enemies alike.

Seastone Trident - Fizz's attacks bleed his enemies, dealing magic damage over several seconds. Fizz can empower his next attack to deal bonus damage and empower his further attacks for a short time.

Playful / Trickster - Fizz hops into the air, landing gracefully upon his spear and becoming untargetable. From this position, Fizz can either slam the ground or choose to jump again before smashing back down.

Chum the Waters - Fizz tosses a fish in a direction that attaches to any champion that touches it, slowing the target. After a short delay, a shark erupts from the ground, knocking up the target and knocking any nearby enemies aside. All enemies hit are dealt magic damage and slowed.

You can create your own unique Fizz builds using the Fizz Build Calculator or use a Fizz guide from the Fizz Guides list above.