LoLSolved is an software based theorycrafter for League of Legends builds. Select the champion, select the role, select the high level stats you want to optimize for e.g. Burst Damage, Physical Damage Resistance, Gap Close, etc. and LoLSolved will return the optimal build order.

The builds on the site are all dynamic, you can change the Runes, Items, increase the enemy's Armor, add Grievous Wounds, start with a Seeker's Armguard, change a build to ARAM mode, etc. and LoLSolved will re-optimize the rest of the build order for you.

You can create guides from the lol builds you find in two clicks, then add wiki text and even embed your Twitch channel. 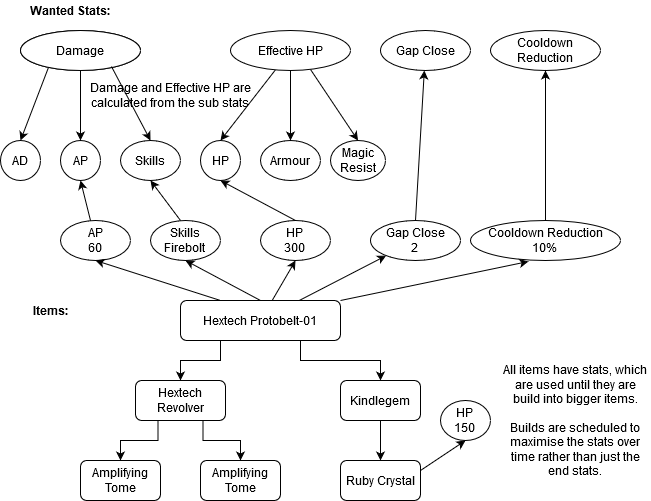 To use the site go to the Builds page on the top bar.
First, select your champion, you can use the search bar at the top to find a champion quickly
For now select Zoe as the champion. 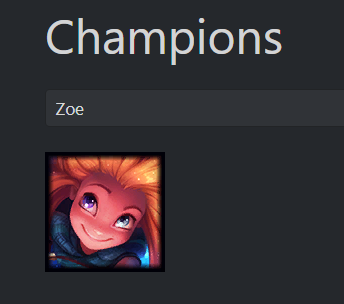 This gives the following build order below. That is optimized to give the stats we asked for. Stats like Ability Power, Attack Damage, Attack Speed, etc. were automatically translated into Damage using a model of Zoe's abilities. 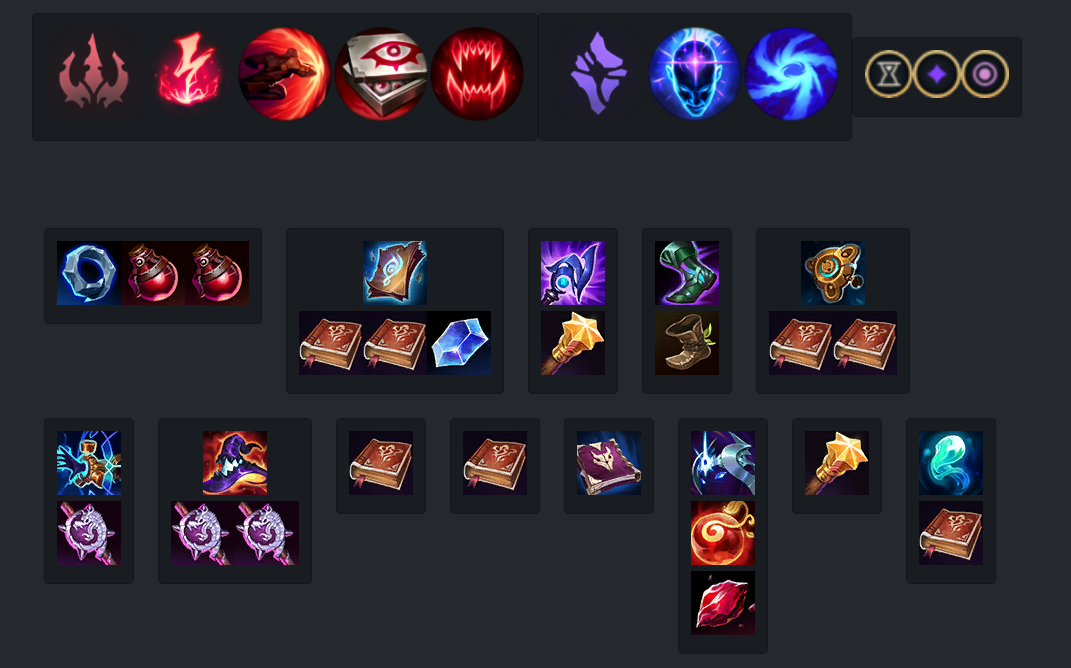 But the on paper stats don't always tell the complete picture, Zoe has a strong early game and can take advantage of this by using early game items. We can force the taking of Biscuit Delivery, Timewarp Tonic and Corrupting Potion. A bar will appear under the Reset and Add Engine Option buttons, initially Red, it will change to Yellow (once it first gets a possible build) then disappear once it has finished optimizing the build. This runs in your browser and will take 0 to 60 seconds to complete. It runs faster in Google Chrome due to it's better Javascript engine.

We now get the following build:

This is good but we think the boots are in the wrong place. Let's change that by using the Add Engine Option button. We can add two engine options, Set Tier 1 Boots Gold and Set Tier 2 Boots Gold to move the boots into the correct position.

This produces the following build below with the boots in the right place:

The optimizer supports the following options:

First select the champion you want to make a guide for. 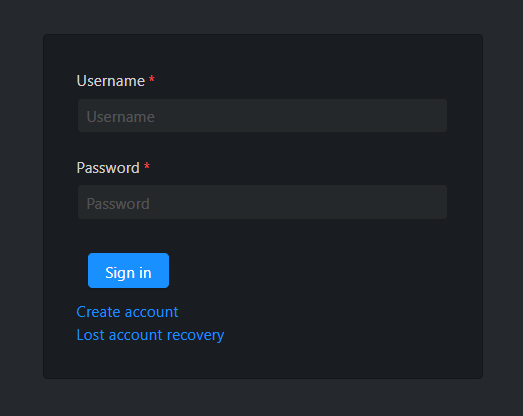 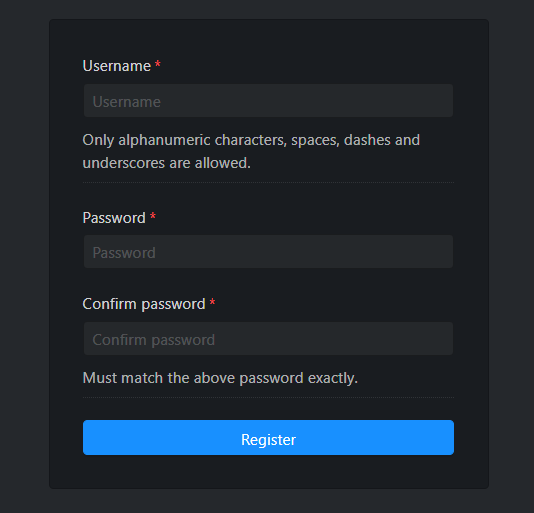 On creating an account you will be given an account recovery token in case you forget your password. If you are writing an serious guide, screenshot it and save it to your computer.

Fill out the basic info about your guide: Guide title, can other people find the guide, the guide's image in the list and the position

If you have a Twitch Channel you can add it in "Embed Your Twitch Channel" to have it auto play on the guide. Unlike some other sites, there is no charge for this feature. 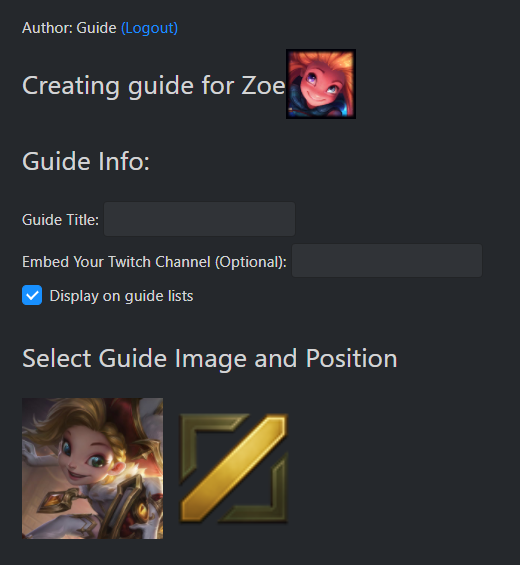 Set the summoner spells for the guide. You can have up to 4 sets. 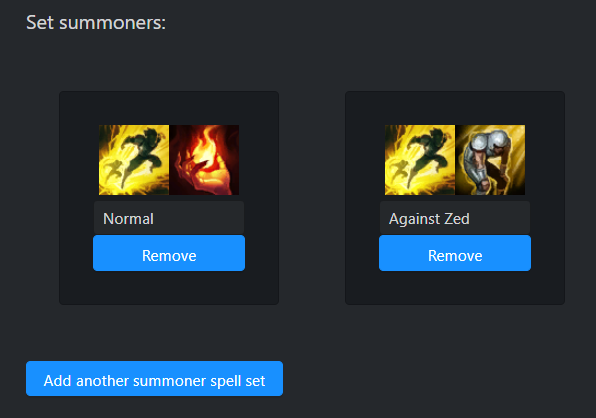 Now you can add builds from the build calculator. Click on Build ID Finder to open it in a new tab. You will need to fill in the build names and builds ID for the guide.

This is the build calculator but at the top is an build ID for use in guide creation.
You can make any changes you want including forcing all the runes and items to be whatever you want, which probably defeats the point but it's up to you as the guide author.

Next is the guide text. You have access to wiki style text for this. You can do most things with the UI. More advance stuff needs you to use bbcode. (See guide formatting instructions) Three buttons to note are:
The LoL button that lets you insert images listed here such as champion, skill, rune and item images.
The insert image button that lets you insert images hosted on another website.
The view source button for working with bbcode directly.

Submit your guide. Don't worry you can change it later!

Builds can be converted to Aram by selecting

The max range of sliders can now be increased by clicking Double Max Slider Lengths under Advanced Engine Options. This is useful for creating builds such as Maximum Ability Haste builds.

Anathema's Chains and Hullbreaker added to the site.

Switching to range sliders for some stats to allow more precision when creating builds. Still a work in progress. Suggestions welcome in Discord.

Dr. Mundo has been updated to his reworked version.

So Lux is an Artillery and Burst champion, Jinx is an Marksman, Viktor is an battlemage, Diana is an Assassin, etc, etc, etc.. You can now directly jump between similar champions at the bottom of the page.

Gwen is now on the site. Gwen builds here 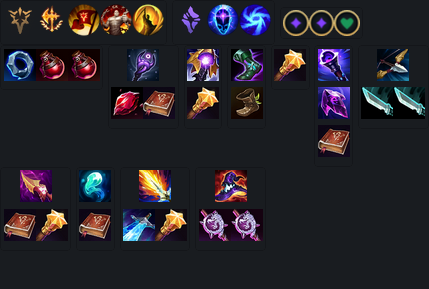 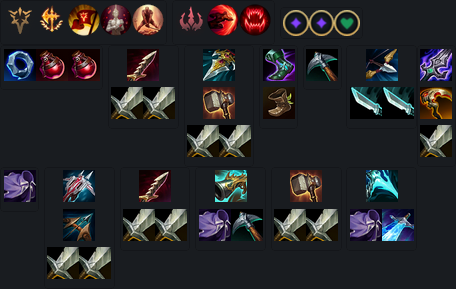 Generating lol builds with custom options is now vastly faster than previously, especially on mobile phones.
Engine options have been moved to the Advanced Options dialog.

You can now create guides by clicking "Save As Guide" then "Submit Guide" from the build calculator.

User guides have been added to the site

You can now create your own guides on the site. The site's UI has been upgraded using halfmoon. The site is at patch 11.2. Viego will be added tomorrow. You can use the calculator page on the navbar to go directly to the champion build calculators.

Added PBE Rell to the site. Site is currently at patch 10.24 (latest).

The League of Legends builds on this site are generated via generic algorithms searching for the theoretical maximum builds for the champions in the various roles. Aka. If Cloak of Agility is buffed then we can tell you how many you should be building and when before anyone has ever played a game with the change.

There is information on the About Page about how this site works or you can start playing with the Builds here.

We will be starting on season 11 builds shortly.