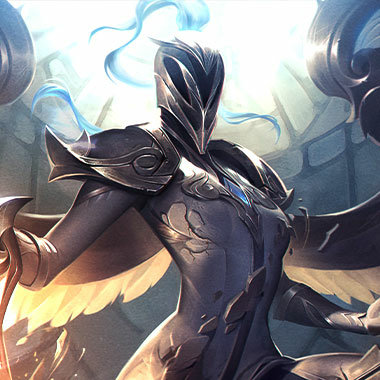 Born to a Targonian Aspect at the height of the Rune Wars, Kayle honored her mother's legacy by fighting for justice on wings of divine flame. She and her twin sister Morgana were the protectors of Demacia for many years—until Kayle became disillusioned with the repeated failings of mortals, and abandoned this realm altogether. Still, legends are told of her punishing the unjust with her fiery swords, and many hope that she will one day return…

Divine Ascent - Kayle's attacks are empowered by the heavens as she levels up and spends skill points. Her wings are lit aflame as she progressively gains Attack Speed, Movement Speed, Attack Range, and waves of fire on her attacks.

Radiant Blast - Kayle conjures a portal, summoning a celestial sword that pierces through enemies, slowing, damaging, and reducing the resistances of all hit.

Celestial Blessing - Blessed by the divine, Kayle heals and grants movement speed to herself and the nearest ally.

Divine Judgment - Kayle makes an ally invulnerable and calls upon former Aspects of Justice to purify the area around her target with a holy rain of swords.

You can create your own unique Kayle builds using the Kayle Build Calculator or use a Kayle guide from the Kayle Guides list above.