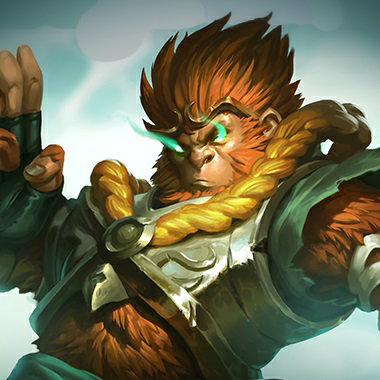 Wukong is a vastayan trickster who uses his strength, agility, and intelligence to confuse his opponents and gain the upper hand. After finding a lifelong friend in the warrior known as Master Yi, Wukong became the last student of the ancient martial art known as Wuju. Armed with an enchanted staff, Wukong seeks to prevent Ionia from falling to ruin.

Warrior Trickster - Wukong becomes Invisible and dashes in a direction, leaving behind a clone that will attack nearby enemies.

Nimbus Strike - Wukong dashes to a targeted enemy and sends out images to attack enemies near his target, dealing damage to each enemy struck.

Cyclone - Wukong's extends his staff and spins it around repeatedly, gaining Movement Speed.

Enemies struck take damage and are knocked up.

You can create your own unique Wukong builds using the Wukong Build Calculator or use a Wukong guide from the Wukong Guides list above.