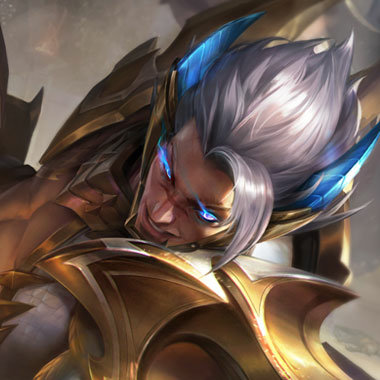 A leader of Ionia's growing criminal underworld, Sett rose to prominence in the wake of the war with Noxus. Though he began as a humble challenger in the fighting pits of Navori, he quickly gained notoriety for his savage strength, and his ability to take seemingly endless amounts of punishment. Now, having climbed through the ranks of local combatants, Sett has muscled to the top, reigning over the pits he once fought in.

Knuckle Down - Sett's next two attacks deal additional damage based off of the target's max health. Sett also gains movement speed while moving towards enemy champions.

Haymaker - Sett passively stores damage he takes as Grit. On cast, Sett expends all stored Grit to gain a shield and punch an area, dealing true damage in the center and physical damage on the sides.

Facebreaker - Sett pulls in all enemies on opposite sides of him, dealing damage and stunning them. If enemies were only on one side, they are slowed instead of stunned.

The Show Stopper - Sett carries an enemy champion through the air and slams them into the ground, dealing damage and slowing all enemies near where they land.

You can create your own unique Sett builds using the Sett Build Calculator or use a Sett guide from the Sett Guides list above.