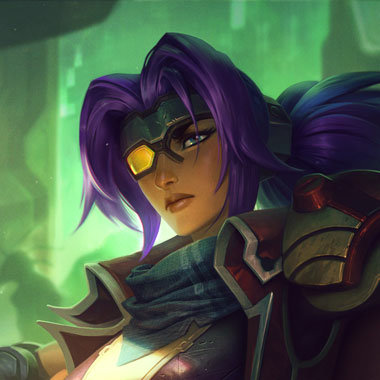 Sivir is a renowned fortune hunter and mercenary captain who plies her trade in the deserts of Shurima. Armed with her legendary jeweled crossblade, she has fought and won countless battles for those who can afford her exorbitant price. Known for her fearless resolve and endless ambition, she prides herself on recovering buried treasures from the perilous tombs of Shurima—for a generous bounty. With ancient forces stirring the very bones of Shurima, Sivir finds herself torn between conflicting destinies.

Fleet of Foot - Sivir gains a short burst of Movement Speed when she attacks an enemy champion.

Boomerang Blade - Sivir hurls her crossblade like a boomerang, dealing damage each way.

Spell Shield - Creates a magical barrier that blocks a single enemy ability cast on Sivir. She receives Mana back if a spell is blocked.

On The Hunt - Sivir leads her allies in battle, granting them a surge Move Speed for a period of time. Additionally passively grants Sivir bonus Attack Speed while Ricochet is active.

You can create your own unique Sivir builds using the Sivir Build Calculator or use a Sivir guide from the Sivir Guides list above.