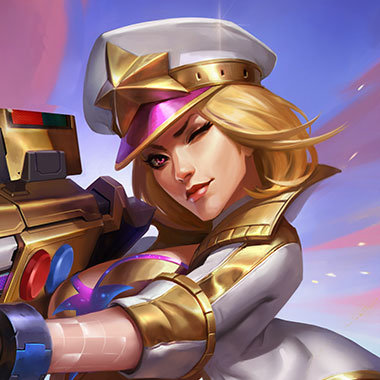 Renowned as its finest peacekeeper, Caitlyn is also Piltover's best shot at ridding the city of its elusive criminal elements. She is often paired with Vi, acting as a cool counterpoint to her partner's more impetuous nature. Even though she carries a one-of-a-kind hextech rifle, Caitlyn's most powerful weapon is her superior intellect, allowing her to lay elaborate traps for any lawbreakers foolish enough to operate in the City of Progress.

Headshot - Every few basic attacks, or against a target she has trapped or netted, Caitlyn will fire a headshot dealing bonus damage that scales with her critical strike chance. On trapped or netted targets, Caitlyn's Headshot attack range is doubled.

90 Caliber Net - Caitlyn fires a heavy net to slow her target. The recoil knocks Caitlyn back.

Ace in the Hole - Caitlyn takes time to line up the perfect shot, dealing massive damage to a single target at a huge range. Enemy champions can intercept the bullet for their ally.

You can create your own unique Caitlyn builds using the Caitlyn Build Calculator or use a Caitlyn guide from the Caitlyn Guides list above.