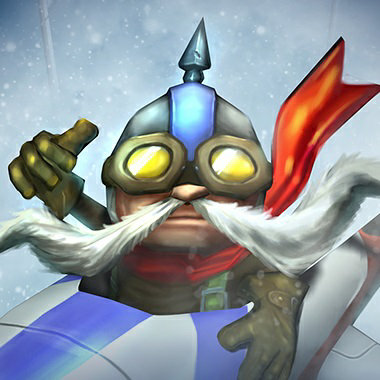 The yordle pilot Corki loves two things above all others: flying, and his glamorous mustache... though not necessarily in that order. After leaving Bandle City, he settled in Piltover and fell in love with the wondrous machines he found there. He dedicated himself to the development of flying contraptions, leading an aerial defense force of seasoned veterans known as the Screaming Yipsnakes. Calm under fire, Corki patrols the skies around his adopted home, and has never encountered a problem that a good missile barrage couldn't solve.

Hextech Munitions - A percentage of Corki's basic attack damage is converted into .

Corki can occasionally retrieve The Package inside his base, granting him movement speed and an empowered cast of Valkyrie.

Phosphorus Bomb - Corki fires a flash bomb at a target location, dealing magic damage to enemies in the area. This attack additionally reveals units in the area for a duration.

Valkyrie - Corki flies a short distance, dropping bombs that create a trail of fire that damages opponents who remain in it.

Gatling Gun - Corki's gatling gun rapidly fires in a cone in front of him, dealing damage and reducing enemy Armor and Magic Resist.

Missile Barrage - Corki fires a missile toward his target location that explodes on impact, dealing damage to enemies in an area. Corki stores missiles over time, up to a maximum. Every 3rd missile fired will be a Big One, dealing extra damage.

You can create your own unique Corki builds using the Corki Build Calculator or use a Corki guide from the Corki Guides list above.